I recently heard Sarah Thebarge (http://sarahthebarge.com/), author of The Invisible Girls, share a story of her overwhelmingly difficult ministry of offering health aide in Togo, Africa. She equated it with Sisyphus.

In Greek mythology, Sisyphus was the king of Ephyra (now known as Corinth). He makes the gods angry because of his constant deceitfulness and craftiness, and so they condemn Sisyphus to an eternal punishment. The punishment is that for the rest of eternity he must put a huge rock on his back and carry it up a hill. However, just before he gets to the top of the hill, it rolls back down, and he has to do it over and over and over again. The story gives rise to a word: Sisyphean, which means “a task which is utterly useless, hopeless, and futile.”

Sarah felt that no matter how much work she put into the hospital in Togo where she was serving and how hard she searched for solutions to heal the people, diseases would spread and the sick people would die. And every shift she had to go back and keep doing the same thing over again. 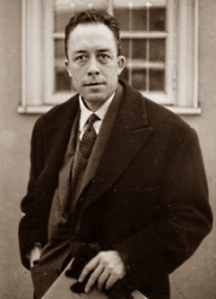 Albert Camus writes an essay on Sisyphus and argues that we must think of him as the victor and not the victim. Camus believes that he is the hero of the story, and that we must even believe him to be happy.

How is that possible!? How could Sisyphus possibly be happy while in the midst of never-ending exhaustion and frustration?

We must think of him as happy for one reason. Sisyphus is happy because he fell in love with the rock.

Since Sisyphus fell in love with the rock, it’s nothing for him to put it on his back, carry it all the way up the hill, and do it over and over and over again. He loves the rock.

It reminds us of Jesus, the ultimate Sisyphus in one sense. Out of love he came down to earth, put the world on his back, loved us so much that he carried us all the way to the top of Calvary and then lied down and died for us. 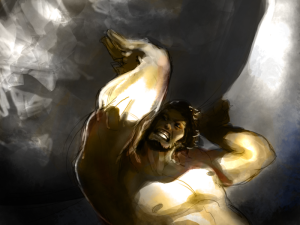 The famous love chapter ends with this verse: “Now these three remain: faith, hope, and love. And the greatest of these is love” (1 Cor. 13:13). Why is love the greatest? Thebarge says, “If Sisyphus would have only had faith, he would have been waiting that God would suspend the laws of nature so that the rock would not be heavy anymore or would not roll down the hill. If Sisyphus had only had hope, he would have waited for a moment in the future when his situation would change and it wouldn’t be so hard. But it was love that makes Sisyphus put the rock on his back and do the hard work in the here and the now to carry the rock higher.”

The global statistics are daunting.

The world’s needs are unfathomable.

The rock is too heavy!

The hill is too high!

Who are we to make a difference?

And in the midst of hopelessness and exhaustion, when we are ready to give up, Christ reminds us that he has already carried that burden up that hill. And he did it out of love.

So all at once we have the privilege of being freed from the burden, and yet willingly, lovingly, happily carrying it with Him.

“The truth is that Sisyphus is in love with the rock. He cherishes every roughness and every ounce of it. He talks to it, sings to it. It has become the Mysterious Other. He evens dreams of it as he sleepwalks upward. Life is unimaginable without it, looming always above him like a huge gray moon.” –Stephen Mitchell

“For Christ’s love compels us, because we are convinced that one died for all, and therefore all died” (2 Cor. 5:14).