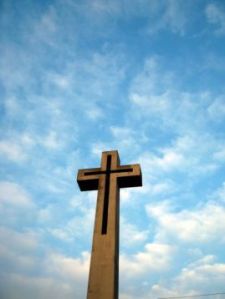 Hate had nailed Jesus to the Cross. Religious men had become devilish in their opposition to the Son of God. Brutal men had carried out the execution of the Son of Man. As Jesus died, the sun covered its face in shame, and the earth trembled in embarrassment

A sound escaped from parched and swollen lips. Was it a moan of agony? Was it the rambling of a mind shoved over the threshold of unendurable pain? NO! The words formed the briefest of statements describing the most important single event in history: “IT IS FINISHED.”

To the hate-twisted minds of the religious bigots who schemed this murder, the words came as a welcome relief. The troublesome yet awesome Prophet who claimed to be the Messiah was quieted. This magnetic Teacher who taught with unique power was silenced. The miracle-working Carpenter was no longer a threat to them.

To the brutal soldiers, the death of Christ offered some excitement and diversion from the normal day of putting the sword to women and children.

To the curious mob, the crucifixion of Christ provided a lively topic of gossip in the bars and taverns on the day.

To the shocked disciples, the sudden end of their leader brought dismay and discouragement. It had been such a beautiful dream. Their years with Jesus had built expectations of dramatic social and spiritual change. Now they would attempt to rebuilt their lives, knowing they would always muse on what might have been.

To Jesus, the words, “IT IS FINISHED: meant that love had bridged the gap between a holy God and sinful man. The three words were uttered as a soul-satisfying proclamation that salvation’s door was opened.

To the world, the words “IT IS FINISHED” represent a Maga Carta, a Declaration of Independence, and an Emamcipation Proclamation all rolled into one – and more. Here is man’s redemptive Bill of Rights!.