*Excerpt from the book: 131 Christians Everyone Should Know

“For God’s sake, do not put yourself at odds with the Word of God. For truly it will persist as surely as the Rhine follows its course. One can perhaps dam it up for awhile, but it is impossible to stop it.” 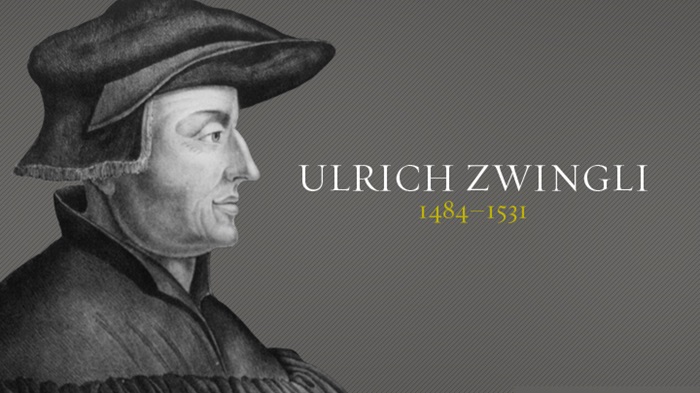 Ulrich Zwingli, the city chaplain, stood before the Zurich City Council in January 1523. The winds of reform had made their way over the Alps from Luther’s Germany, and Zwingli was arguing 67 theses, beginning with “All who say that the gospel is invalid without the confirmation of the church err and slander God.” Though 28 shy of Luther’s 95 Theses, published some six years earlier, Zwingli’s arguments were more persuasive: authorities gave him permission to continue his preaching, which emphasized Christ first and the church second (“Christ is the only mediator between God and ourselves,” said another of Zwingli’s theses). The Reformation in Switzerland was now well on its way, and Zwingli would play the key role in the early years. 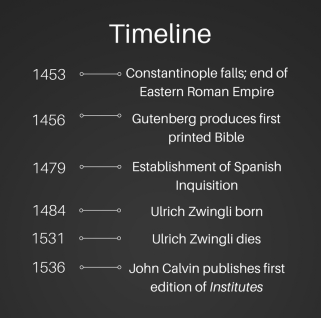 Anxious for his charge

Zwingli was born to a successful farmer in the Toggaburg Valley of the eastern lower Alps. Here Zwingli developed a deep love for his homeland. Later he translated one line of Psalm 23, “In the beautiful Alps, he tends me,” and he used the Rhine River as an illustration of a key theme of his preaching: “For God’s sake, do not put yourself at odds with the Word of God. For truly it will persist as surely as the Rhine follows its course. One can perhaps dam it up for awhile, but it is impossible to stop it.”

But it took Zwingli years to discover the power of this Word. After graduating from the University of Basel in 1506, he became a parish priest in Glarus. From the beginning, he took his priestly duties seriously. He later wrote, “Though I was young, ecclesiastical duties inspired in me more fear than joy, because I knew, and remain convinced that I would give an account of the blood of the sheep which would perish as a consequence of my carelessness.”

The feeling of responsibility for his charge (rather than, like Luther, a personal search for salvation) motivated Zwingli’s increasing interest in the Bible. In an age when priests were often unfamiliar with the Scriptures, Zwingli became enamored with it, first after purchasing a copy of Erasmus’s New Testament Latin translation. He began teaching himself Greek, bought a copy of Erasmus’s Greek New Testament, and started memorizing long passages. In 1519 he began preaching from the New Testament regularly.

Privately Zwingli also started challenging the customs of medieval Christendom he thought unbiblical. He had struggled with clerical celibacy for some time (and even admitted that as a young priest, he’d had an affair). In 1522 he secretly married. That same year, he broke the traditional Lenten fast (by eating sausages in public) and wrote against fasting.

By 1523 he was ready to take his ideas to a larger audience, and in January he did just that before the Zurich City Council at what is now called the First Disputation. The Second Disputation came in October, and with further approval from the council, more reforms were carried out: images of Jesus, Mary, and the saints were removed from the churches; the Bible was to have preeminence.

Things moved rapidly after that. In 1524 he wedded his wife publicly, insisting that pastors had the right to marry. In 1525 he and others convinced the city to abolish the Mass, with its emphasis on the miracle of transubstantiation, and replace it with a simple service that included the Lord’s Supper but only as a symbolic memorial.

As it turned out, it was the Lord’s Supper that prevented the uniting of the German and Swiss reform movements. At a 1529 meeting at Marburg, called to unite the two movements, Luther and Zwingli met. Though they agreed on 14 points of doctrine, they stumbled on the fifteenth: the Lord’s Supper. Against Zwingli’s view, Luther insisted on Christ’s literal presence. Zwingli balked. Luther said Zwingli was of the devil and that he was nothing but a wormy nut. Zwingli resented Luther’s treating him “like an ass.” It was evident no reconciliation was possible.

Zwingli died two years later in battle, defending Zurich against Catholic forces, and plans for spreading the Reformation into German Switzerland were ended. Still Zurich remained Protestant, and under the leadership of Heinrich Bullinger, Zwingli’s successor, this unique branch of the Reformation continued to blossom.

This article was originally published at: Christianity Today