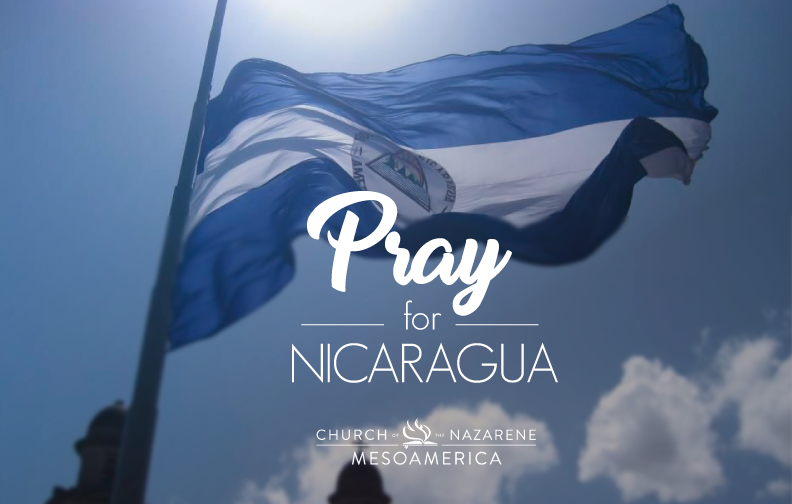 Many readers of this blog have recently seen the news and are aware that Nicaragua is in crisis.  Thousands of protesters have marched in the Nicaraguan capital Managua and other cities to promote democracy.

Demonstrators blocked main roads, waving placards and chanting slogans.  Weeks of anti-government protests have led to at least 76 people being killed in clashes with security forces.  Four people were killed in clashes on Saturday, police and witnesses say.

Yesterday and today I have been in contact with Rev. María Antonia Ponce, District Superintendent of Nicaragua Central.  Although I had heard reports of persecution of our Nazarene churches, she assures me that as of today there have not been any attacks on our congregations.  Still, the situation is critical.  “Each day we wake up with uncertainty,” Ponce says.  “Many have died, almost all youth, and the majority of them are students in different universities.”  One month has passed since the first conflicts erupted and the superintendent urges Nazarene members in the Mesoamerica Region and around the world to intercede for them and their country. “We feel very sad, because for more than a month we have been under great pressure due to the disturbances in Nicaragua. Sadly, today for the first time, with tears in our eyes, we have closed the district office. We remain under the protection of the Most High and wise God. We do not wish to continue risking our lives and so we have chosen to leave since we had found ourselves in the crossfire between the police and the students. There are many people injured and we do not wish to join the list of the deceased. This situation brings us great pain. We ask that, as the Body of Christ, we would unite in prayer for peace in Nicaragua.”

In spite of all that is occurring, Ponce rejoices in the generous spirit of her fellow Nicaraguans.  In the midst of pain, unemployment, and even cancelling of worship services (in Managua, Masaya, and León, all services other than those held on Sunday mornings have been cancelled for security reasons), the Nazarene churches are collecting offerings for their Cuban brothers and sisters affected by the plane crash two weeks ago.  “It’s an honor and a blessing for us to be able to help in the midst of our own crisis,” she declared.

Our brothers and sisters in Nicaragua need our encouragement and spiritual support.  Even though they have felt alone in these days, they know that they are connected to a global denomination that is lifting them up.

Let’s pray for the peace of Nicaragua.  Let’s pray that God’s will be done in this nation as it is in heaven.  Nicaragua, we are with you!