Many readers of this site know that my family and I were able to attend the World Cup in Russia this past month.  It was a remarkable time and a once-in-a-lifetime experience.  Perhaps the thing I remember most is the passion that so many people had for their countries and for football/soccer.

I saw it in the literally tens of thousands of Mexicans and Colombians that traveled, dressed up, and chanted for their teams at all times of the day or night. I saw it when the host team, Russia, unexpectedly beat Spain in the Round of 16, and the Moscow streets erupted in joy.

But perhaps I did not personally experience the many levels of passion at the World Cup more so than in the two games we were able to go to.  Before the first game, June 26, we were caught up in the fervor of the Danish fans who filled the Metro stations and the streets chanting and singing for their team and country.  Sadly, the passion they and their French counterparts showed before and during the game was not shared by their national teams.  France v. Denmark has been widely recognized as the worst game of the tournament. 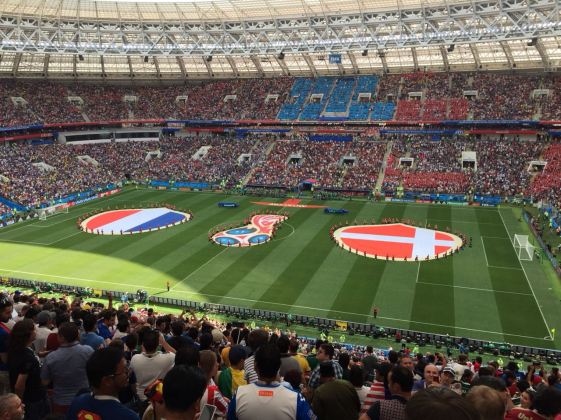 We knew something was wrong when the lineups came out and hardly any of the stars were starting.  No Pogba or Mbappe?!  Not even Lloris or Umtiti?! Well, at least the subs will play their hearts out, right? Nope.  Both teams knew that they just needed a tie to go through to the next round.  So, they played like it was a scrimmage.  No urgency.  No one trying too much.  All of the neutral fans grew restless and even angry throughout the two hours.  We paid money for this? We came all this way to watch this charade?!

Did you know that the word “passion” originates from the Latin word “passio” which is closely related to the Greek root “path” meaning “to suffer”? By the time the game ended 0-0, the entire stadium was raining down boos on the teams for such a disgraceful performance. It is truly hard to explain how disappointed we all were.  I actually started to cry because I was so sad our family had chosen to go to THAT of all games.  Bleck.

But all was not lost.  The final game we attended was July 3 in Moscow.  Round of 16 – Colombia v. England.  I kid you not: I gathered my family together before we headed to the stadium and prayed that God would give us a great game.  I did not care what the outcome was: I just wanted it to be memorable. 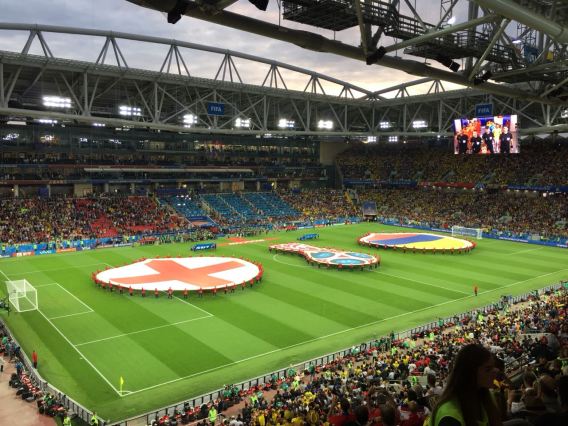 And boy was it!   Controversy was constant with a penalty being awarded and both teams pushing and jockeying for position at every free kick.  Yerri Mina, a Colombian defender, tied the game up 1-1 in stoppage time at the end of the second half while the stadium full of mostly Colombian supporters went wild.  Then, it went to penalties, where England has a history of crashing and burning.  But not today, folks! Nearly three hours after the first kick, England buried their final penalty and proceeded to the next round while both fans and the team exuberantly rejoiced.  It was a phenomenal game and the most energy I have ever experienced at a soccer game by far (and I’ve been to dozens in many different countries!).

I should add that, as we got ready for penalties and the supporters of each team were cheering and hugging and even praying, I started to cry again.  But this time it was out of unbridled happiness that we had gotten to be a part of an event like that.

What was the difference between the two games? Essentially one thing: passion.

I know the circumstances dictate that there is less to play for at certain times in the tournament.  But this is the World Cup.  If you are going to step on the field, you should give it your all.

This is a belief that propels me in my daily life and guides me in my spiritual walk. If it is worth doing, it’s worth doing well.  Live passionately, and especially let the source of that passion be more than football or food or movies or your job or even your family.

The only wellspring of passion that will never run dry or disappoint is Jesus Christ. He offers abundant life (Jn. 10:10) and glorious salvation (Jn. 3:16).  In my case, he has put a calling on my life to preach – and do so cross-culturally – so that I cannot hold it in; like Jeremiah, it is a fire in my bones (Jer. 20:9).

Anyone who has met me knows that I am passionate about futbol.  But I pray that everyone knows I am even more passionate about Christ and his mission.  He, after all, gave himself for us on the cross in what has become known as – you guessed it – the Passion.

If you have not yet experienced that compelling, driving force in your life, allow the one, true Source of passion to instill his fire in you. You – and all those around you – will truly never be the same!