Along with the rest of the world I watched yesterday as the Notre Dame Cathedral in Paris, France went up in flames.  The unspeakable tragedy became clear as its famous spire tumbled to the ground below. Millions of people correctly lamented such a horrendous loss and attempts to raise funds in order to refurbish the cathedral are thankfully bearing fruit, although the overall cost of renovation will be astronomical.

Amidst the wreckage, photos began to show the impact of the fire.  One in particular, by Reuters’ Philippe Wojazer, hit home with many of us.  It shows the altar inside Notre Dame, with smoke still rising from its ruins.  But, as many pointed out on Twitter and elsewhere, the viewer’s eyes are not drawn at first to the orange-red embers of the ashes. The preeminent symbol rising from the wreckage is a golden cross.  After all the devastation and loss, the cross is still there. 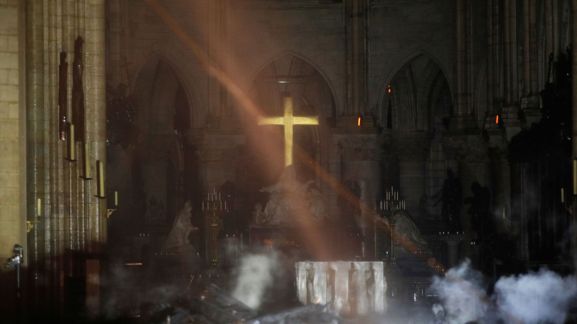 I am not the first one to write about this symbolism and I will assuredly not be the last. But the fact that this occurs during Holy Week is not lost on many of us.  In a world that proclaims in Europe and elsewhere that Christianity is outdated and nothing more than a fond relic, followers of Christ proclaim this week and always that Jesus’ death on the cross is still effective to change lives. In fact, we proclaim that God is still at work in a burning world.

Every year I call our people to reflect on our Lord’s journey to the cross during Lent. And every year I receive criticism from different leaders and church members.  “Lent is Catholic, not Evangelical!” “We celebrate a risen Lord; stop promoting empty traditions!” I know some of this is cultural according to the countries where I minister, and I don’t want to diminish that.  But I refuse to allow myself or my family to gloss over Good Friday in order to get to Easter.

Thus, especially during Lent, I have preached many times on the subject of the cross and Christ’s sacrifice.  On some occasions, I have had Christians come up to me afterwards and say, “Why do you preach on the cross? The cross is no more; what matters is the empty tomb.” Now I am clearly a proponent of preaching and living the reality of the Resurrection! However, there is no empty tomb without the cross.  There is no crown of glory without first a crown of thorns.

Although focusing on a symbol of ancient capital punishment makes us uncomfortable, the truth remains.  The cross is still there, whether we like it or not.

Perhaps this is why the apostle Paul said that Christ crucified is “a stumbling block to Jews and foolishness to Gentiles” (1 Cor. 1:23).  In the midst of rubble, this representation of death declares life to us.  In the midst of destruction, this symbol of scorn and ridicule brings hope.

This week, as we join Jesus in his journey through Gethsemane and Golgotha and then, yes, the Easter garden, perhaps an image from a smoldering Notre Dame could assist us.

Though some say it’s obsolete,

Though others feel awkward talking about it,

The cross is still there.

2 thoughts on “The Cross is Still There”